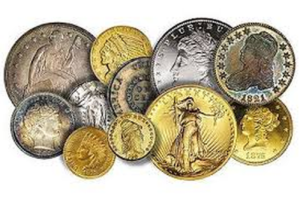 Identifying Coins from the U.S. Mint

Coins produced by the United States Mint fall basically into the following categories.

A regular issue coin was struck by the mint for the express purpose of providing coinage for commerce. Nearly every coin you have ever spent falls into this category. These coins outnumber all other categories by hundreds to one. Nevertheless, many regular issue coins are extremely rare. We have provided an image gallery of Regular Issue Coins from the United States of America for you: Regular Issue Coins.

A Pattern coin is essentially the result of a mint test. The mint has made coins when testing their equipment, different metals, or sometimes as approval pieces. Prior to this century, these patterns were often given away or sold by the mint and legitimately worked their way into the collector market. Occasionally, patterns were released in rather large numbers such as the 1,500+ 1856 Flying Eagle cents.

Bullion coins are all relatively recent. They were first made in 1986. These include the Walking Liberty Silver Dollar and several gold issues. Commemoratives and bullion coins (and most patterns) will still have “United States of America” somewhere on the design. All gold coins issued since 1934 are commemoratives, pattern or bullion coins. All silver coins issued since 1971 are commemorative, pattern, bullion or special collector coins. See Bullion Coins for more details.

When the Philippines was a territory of the United States, the U.S. made a short run of coins. Most are copper nickel mixes but a few of them are silver. See Philippines Coins for more details.

There are some coins that are clearly products of the U.S. Mint that do not fit neatly into one of the above categories. The famous 1913 V Nickel (the first coin publicly auctioned for more than US$1,000,000) wasn’t a presentation piece or a proof coin, yet it is clearly a mint product. Miscellaneous American coins are generally EXTREMELY rare.

Your “coin” might also be a medal or token of some kind. Throughout the years, the U.S. Mint has produced inaugural medals, peace tokens, and such. Remember also, that during much of our country’s history, it was legal for banks and even business men to make their own coinage and paper money, as long as it wasn’t a counterfeit copy of a US design.

Identify Coins You Have

If you want to identify a coin in your possession, I would suggest beginning with the regular issues. If you can’t identify a coin from this guide, but still believe it to be a product of the United States mint, please Contact Us and we will be glad to help. 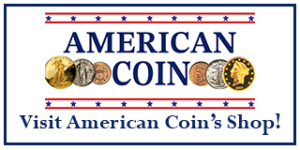 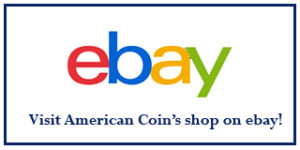